Diabetes is the Most Googled Disease in These Six States 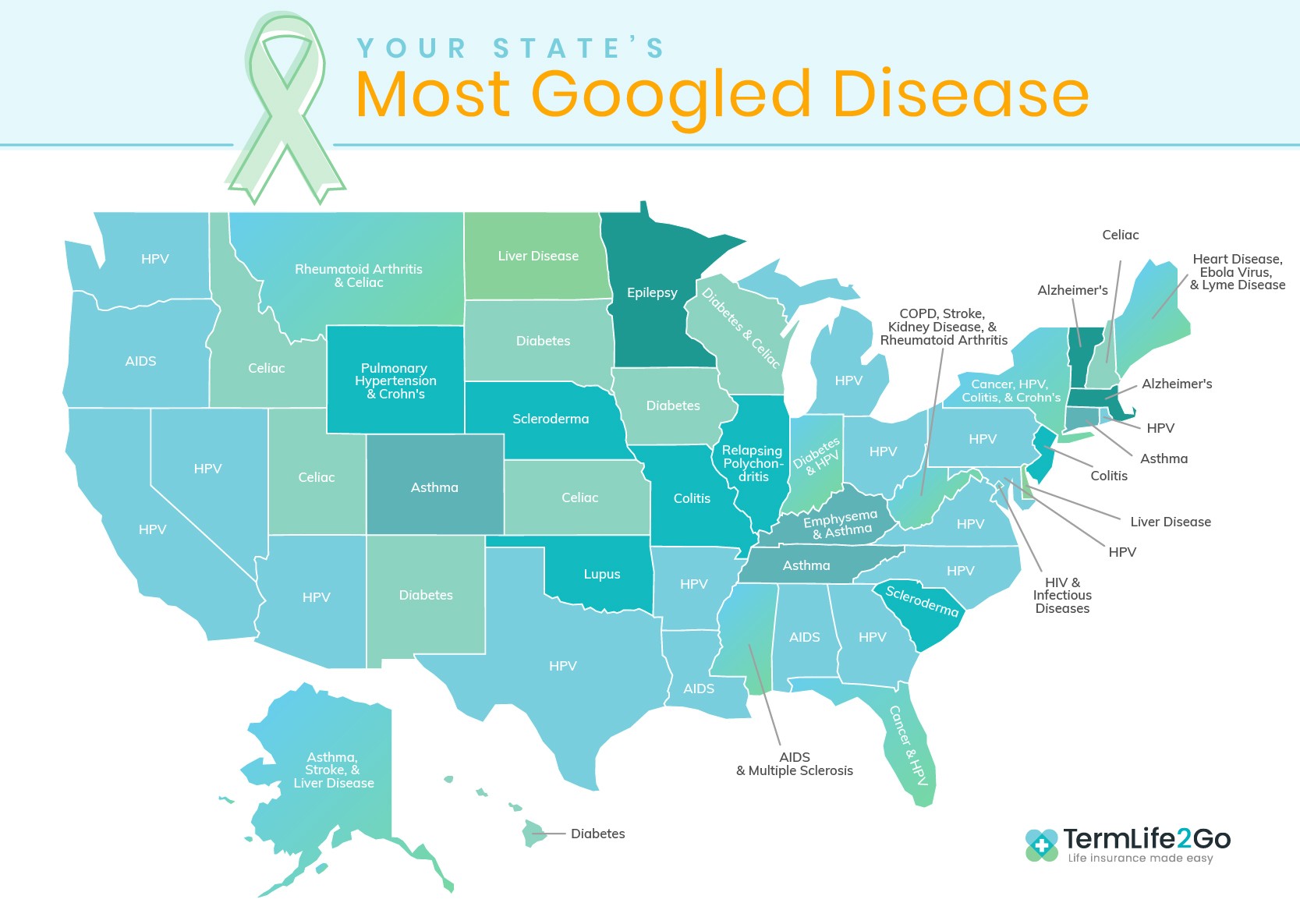 TermLife2Go [2]conducted a study to determine these highly-Googled diseases by state. They used Google Trends and looked at each state over the past year to compile every disease according to search popularity.

Diabetes[3] is a condition in which blood glucose (sugar) is too high. The body uses glucose from food as a source of energy, much like a car uses gasoline for fuel. Insulin[4], a hormone that is made in the pancreas, moves glucose from the bloodstream into cells to be used for energy.

When you have diabetes, your body either doesn’t make enough insulin (or stops making insulin altogether), or doesn’t use its own insulin as well as it should. As a result, glucose builds up in the blood and can’t get into cells to be used for energy.

Diabetes tied with celiac for second most frequently Googled disease. Interestingly, there is some overlap between the two. Recent research shows[5] that having type 1 diabetes puts someone at a higher risk for developing celiac. An estimated 8 to 10% of those with type 1 diabetes also have celiac disease.

See here for a three-part series from Registered Dietitian Amy Campbell for more on celiac disease and diabetes.[6]

An autoimmune disorder, celiac disease occurs when the body mistakenly reacts to gluten, a protein found in wheat, barley and rye, as if it were a poison. It affects as many as one in 100 people, although most have not been diagnosed. When someone with celiac consumes gluten, the immune system reacts by destroying the part of the small intestine that absorbs vital nutrients. This malabsorption can lead to serious illness. Click here to learn more about celiac disease.[7]

In the general population, celiac affects approximately 1 percent of the population. Because of the higher risk doctors recommend that type 1 diabetes patients get screened for celiac.

Exactly why diabetics are more likely to develop celiac disease is still not well understood. [8]While type 1 diabetes usually occurs before the age of 40, in the U.S. the peak age of diagnosis is 14 years old. According to the research, there is no established link between type 2 diabetes and celiac disease.

Managing type 1 diabetes while adhering to a gluten-free diet can be challenging. It is important to keep a close watch on how diet impacts the health of children who have both type 1 diabetes and celiac disease. Dietary counseling is considered essential to ensure patients are eating properly and staying healthy.

The only effective treatment for celiac disease is a lifelong gluten-free diet, and waiting to start a gluten-free diet may have consequences. It increases the risk[9] of osteoporosis, stomach problems, iron deficiency anemia, infertility and other autoimmune disorders.

It’s best to speak with a health professional for diet tips, but some general guidelines include: eating fresh fruits, vegetables, fish, eggs and lean meat; replacing gluten containing foods with gluten-free starches such as rice, corn and quinoa; and carefully checking food labels for gluten in products you might not think of as containing gluten.

If you have diabetes and are wondering whether you have celiac too, you should get tested. Besides the more “traditional” symptoms of celiac, you may notice unpredictable or unexplainable swings in your blood glucose; hypoglycemia[10] a couple hours after a meal; hypoglycemia that is hard to treat; and lack of improvement in your HbA1c[11] level. Of course, these diabetes symptoms can be due to other causes, but, they could be linked to celiac.

For those who are curious, the study revealed that HPV infection is the most commonly Googled disease in the United States. Heart disease is one of the least Googled, though it is the deadliest disease in the country.

Disclaimer of Medical Advice: Statements and opinions expressed on this Web site are those of the authors and not necessarily those of the publishers or advertisers. The information, which comes from qualified medical writers, does not constitute medical advice or recommendation of any kind, and you should not rely on any information contained in such posts or comments to replace consultations with your qualified health care professionals to meet your individual needs.